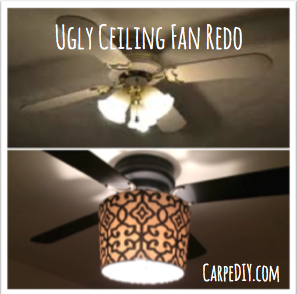 This was the project that started it all. My FIRST-ever DIY at our old apartment...just thinking about it gets me all nostalgic. I have to say, for my first project, it came out pretty awesome. And this has been, by far, the project that has gotten the most pins on Pinterest. So I thought, "why not give the people what the want?".

Jay and I had finally moved to a place where we lived for more than a year (thanks to college and the revolving door of apartments) and it felt good to make it feel like home. Living in a rented apartment, you can't do much to the existing fixtures and appliances. With that said, I felt like if I could make it so much better than the original, then I might be able to get away with it...

Step 1: Turn. Off. The. Power. Redoing this fan wasn't especially hard, but remember, you're dealing with electricity. You have to be cautious. So first things first...head to your breaker and turn off the electricity while you're working on it. 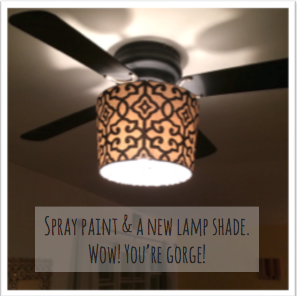 Step 2: Disassemble the fixture. Every ceiling fan is different, but most have the same basic components. Remove the glass shades and bulbs and set them aside. Each ceiling fan will have 3-4 screws attaching it to the center component. Unscrew and pull down the four blades. Don't be alarmed at how much dust you've allowed to accumulate on top of them, its normal - at least that's what I told myself.

A circular, metal panel will cover the "guts" of the fan. Unscrew and lower the fixture. Then disconnect the wires by twisting off the plastic connectors from the ends of the wires. My advice, TAKE A PICTURE. This will help you when it's been 3 days and you just want to get that bad boy back up.

Step 3: Design your new fan. Depending on the state of your current fan and what you want it to end up like will determine how much further you need to disassemble the fixture. I was in a stage where I wanted everything in my house to look like a Spanish Mission - suffice it to say that I used a lot of matte black spray paint. With that said, I decided it wasn't necessary to paint the gold hardware, so I removed it and just spray painted the blades and the center fixture. 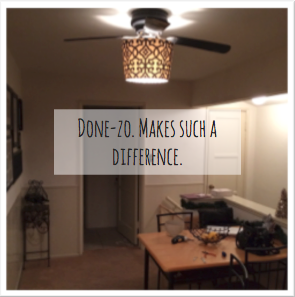 The lamp shade. That was a guy I picked up for $12 from Walmart -- I saw it and actually didn't even know what I wanted to do with it but thought it was too cool looking to pass up. I ended up connecting upside down with one of these and it worked great.

Step 4: Paint that puppy. Take your ceiling fan parts to a well-ventilated area, and lay down a tarp (unless you eventually want a Jackson Pollock painting on your garage floor). Hold your hand about 2-2.5" away and spray in short, cloaking strokes. The surface of a fan blade is slick, so paint can easily drip if you are too heavy-handed. I wanted this look like it was stock-painted, so I took extra care to do 3-4 coats on each side, covering all areas with very light coats.

Step 5: Reassemble. It's pretty straight-forward, but this is by FAR the most tedious part of the process. All of these screws, hardware and electrical wire will make you re-think whether you did something wrong. Don't worry. Look at your photo, add back the fan blades, the mechanism, connect the wires and secure the shade using the bulb extender. You'll feel legitimately bad ass by the end of it, with a beautiful centerpiece to your room as opposed to a white, eye sore.

I'd love to know what you think! Feel free to ask questions, provide feedback or just give props -- it all is appreciated.